Voice is the fastest growing consumer technology the industry has seen to date; by the end of December 2018, 5.7 million adult Australians reported having smart speakers out of an approximate population of 19.3 million (source: Voicebot 2019). This adoption was so significant that now the Australian user base exceeds the U.S. per capita, even though these devices have been available for half the time. That means the percentage of Australian adults that have access to these devices has jumped from zero to 29.3% in just 18 months.

Additionally, monthly users are respectively slightly higher in Australia than the U.S. which is led by faster adoption accompanying more intense usage. Currently, 80% of Australian smart speaker owners use their devices monthly; over 46% say they use them on a daily basis. This means that 2.6 million Australians are engaging with these devices every single day, a number that should not be ignored. Companies and consumers must begin to move past the notion that smart speakers are simply a novelty – many U.S. companies have already incorporated voice as a key channel, and with Australia’s rapid adoption it is more crucial than ever for companies to take on the role of adapting to these new market changes. Once smart speakers are adopted into Aussie homes, they are frequently used – when compared to the U.S., Australia claims a lower number of infrequent users which is a significant finding that again demonstrates how these smart speakers cannot continue to be viewed as a novelty, “one-off” purchase.

Australia has also soared past the U.S. in terms of purchasing power; on average, Australian households have 1.8 devices each, a number that took the U.S. three years to reach. This multiple device adoption is likely correlated with an increased perceived value of smart speakers and a higher likelihood of being a daily user of the devices. However, this should not be surprising – the most dedicated users will want their smart speakers in more than one room so that they will always be within earshot. 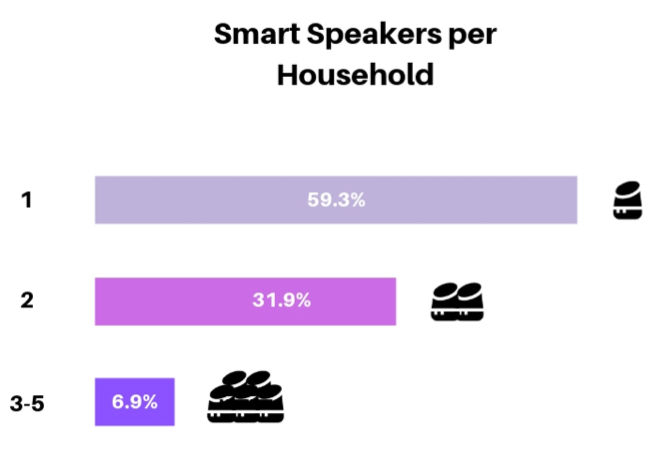 In terms of market dominance, the U.S. and Australian have totally different leaders and incumbents – in Australia Google Home dominates with 68.2%, a share that is almost five times greater than Amazon Echo’s 14.2% share but in the U.S., Amazon has maintained a share of over 60% compared to Google Home’s distant 20%, even though it is the key challenger for Alexa related products. This is an interesting difference that has mainly occurred because of the market entry timings of both companies; in Australia, Amazon Echo launched six months after Google Home and also critically missed the 2017 holiday shopping season where initial consumer habits are being formed. Additionally, Amazon’s main Australian platform, Amazon.com.au, does not have anywhere near the user footprint that it has in the U.S., making Amazon a brand in Australia that is perceived as second to giants such as Apple and Google, who have long had a strong Aussie presence. 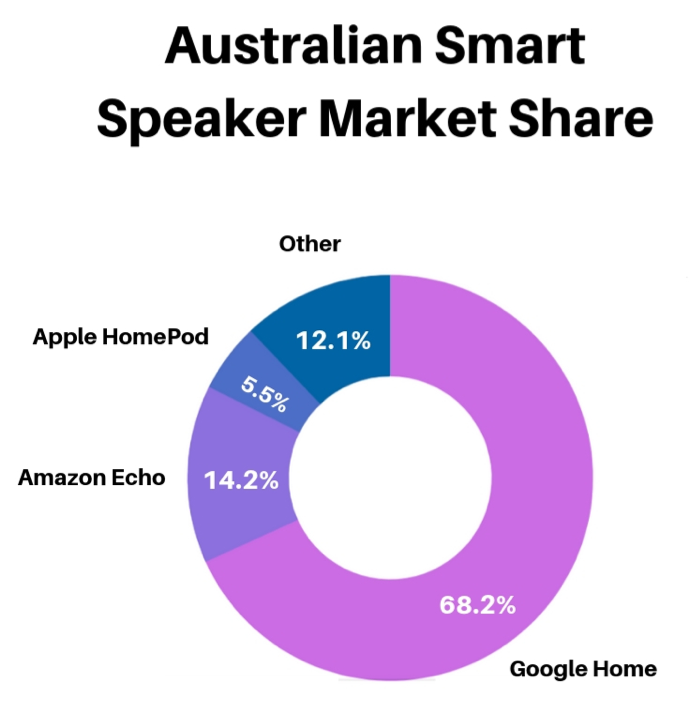 It is also important to note that around 16% of Australians that do not have a smart speaker are interested in purchasing one within this coming year and this demand could potentially lift smart speaker adoption in Australia to 40% by the end of 2019. If this does happen, it means that Australia could be the first country to surpass 33% of population adoption, a milestone that will be reached within a mere two years of smart speakers first becoming available to the market. 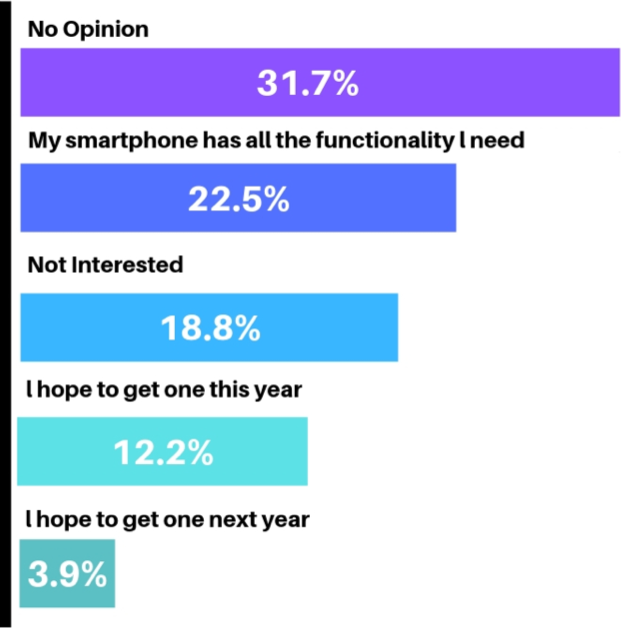 Overall in the past eighteen months, it has become clear that smart speakers are a significant catalyst for voice adoption within Australia. It will be interesting to see if the duopoly of Google and Amazon will continue to dominate the market and if smart speakers will further embed voice assistants into household routines.

Regardless of statistics, Australia has now entered phase two of voice assistant adoption, which is characterised by broader usage and a focus on daily habit formation, compared to phase one that is primarily centred around device adoption. Australian has moved quickly through both phases and unless the U.S. begins to generate a greater devoted user base, Australia will continue to lead the race in smart speaker usage.

Australian brands using chatbots: Who’s using them and why

Is your business ready for chatbots?

Do chatbots really need a personality to succeed?

To read more articles on the latest AI news click here or visit our contact page to get in touch with the Stackchat team today.